Travellin’ Tuesdays: How to Die on Fraser Island 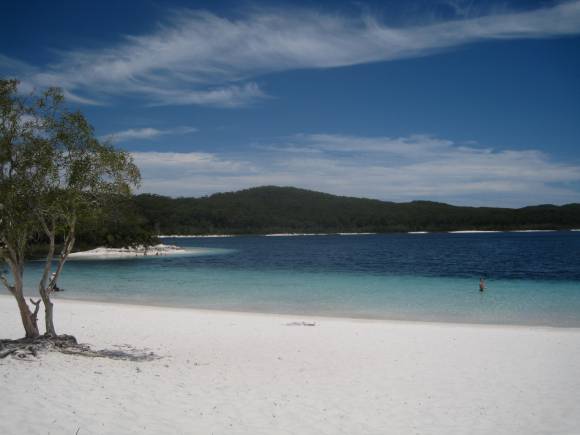 This week I thought I’d share my experiences of Fraser Island, a sand island off the east coast of Australia. My friends and I spent 2 days there, managing to dodge the certain death that we thought was coming to us, courtesy of a 2 hour safety briefing prior to our departure.
In that space of time, we were told about the multitude of ways in which to die in two days of driving, camping and generally getting sand into crevices that we didn’t know existed.

For a start there was the sand itself, we were warned about washouts, hazards that occur on the beach when a section of the ground is swept away leaving a hidden mini-cliff that had rolled many 4x4s in the past. Subsequently our vehicle remained at a respectable speed for the duration, which meant that we became stuck in loose sand next to an ever-nearing tide, forcing us to wedge ourselves headfirst underneath the car to dig ourselves free before the saltwater violated our engine.

Next were the rip tides, just in case the many dangers of the island itself were enough to put you off, a seafaring escape was out of the question. And while we’re on the subject, sharks, crocodiles and every poisonous jellyfish imaginable also called the waters their home. It is fortuitous that the island boasts a number of stunning lakes complete with shores of white sand and crystal blue waters, so that you can have a relaxing day contemplating just how lucky you are to be alive.

Lastly, there is the island’s wildlife, a rather conspicuous aspect of our trip, in which we made sure to be dingo safe (crossing your arms over your chest is scientifically proven to stop wild dogs wanting to attack you, fact.) as one strolled past our campfire without a second look. While the snakes left us alone, the Australia-sized spiders seemingly enjoyed our girlish screams and thus made their presence felt at every opportunity. It was at an Aborigine-run campsite on the first night that I heard, and can still hear to this day, the clicking of pincers emanating from what I can only describe as two tarantulas, a short distance above my head. I try not to imagine what the pair was discussing, other than who was to eat me first. I was, therefore, determined to ignore the spiders in the camp toilets, whose range in size and colour would have excited even the most casual of zoologists, but I was glad to head off to a jellyfish covered beach the next morning.

In our quest to stay alive, we swam in the shallows of a cool lake filled with curious turtles in search of toe-shaped morsels, explored a crusty shipwreck that made us think of our next tetanus shot, and floated nervously in The Champagne Pools alongside microscopic yet deadly jellyfish. It’s probably a good idea that I neglected to inform my mother of the above risks until after I had returned, but as we left the sandy paradise behind, there were only two words I could think of to sum up my experience: character building.