Travellin’ Tuesdays: Great Barrier Reef in a hurricane? Why the hell not. 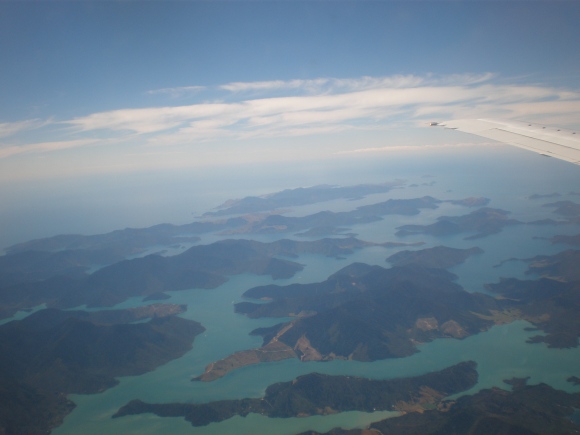 This week I thought I’d talk about visiting the Great Barrier Reef, arguably one of the most astounding sights on the planet. My friends and I took a trip there whilst backpacking up the east coast of Australia, we didn’t get as far north as Cairns but were still able to visit one of the world’s natural wonders – albeit in unusual weather conditions.

Out of our entire Australian experience, myself and four friends spent the most time in the Whitsundays, as three of them were booked onto a scuba PADI course. I have to admit that I envied their exciting adventures underwater (the Whitsundays are definitely the dullest place to spend 8 days when you have nothing planned), but my complete phobia of all things sea related meant that I wasn’t too put out. What did affect my mood was the less than perfect Aussie summer, in which I experienced hurricanes, terrible storms and humidity like you wouldn’t believe, not the best situation when you are camping in the cheapest, and shittest, tent known to man. Seriously, it cost £25 on ebay, had a hole in the top and wasn’t even vaguely waterproof. We were thinking that vents and waterproofing weren’t relevant when you’re camping in the SUMMER. We were wrong.

Anyway, we had booked onto a boat trip to a pontoon in the Reef and were highly excited about entering Nemo’s world. The fact that there were two hurricane-like storms on the horizon slightly dampened our spirits, particularly my friend Sophie, who is infamous for getting sick just by looking at the sea. It turns out that the remaining four of us were the only people on the entire ship not to get seasick during the two hour journey to the pontoon. If you thought that being surrounded by 50 people throwing up could put you off life in general, you were right. Needless to say, we were the first off of the boat when we reached the pontoon, straight into the wetsuits and out into the water.

The pontoon had a number of different activites, such as a glass bottom boat and a water slide, but I was most interested in actually getting into the water. Particularly because it was a roped off area monitored by a lifeguard – I should mention that I have a pathological fear of sharks. As in, I can’t even look at a picture without flinching. But I felt safe, and I was really excited to see some fish that were more exciting than those of the gold variety. It was so peaceful yet bustling with life at the same time, and I was definitely replaying “Just keep swimming” in my head for a good half an hour. From iridescent cuttlefish to, what shall be forever known as ‘Dory fish’, the view was quite spectacular and I was sad to get out and return to a pontoon filled with seasick families determined to get their money’s worth despite overwhelming nausea.

I met up with my friends, who had left for a diving experience and a spin on the glass bottomed boat, they gleefully informed me that they had seen a reef shark. A REEF SHARK. In the water. Near me. Yes, they’re small and harmless, but any creature with ‘shark’ in the name instantly terrifies me and, well, I was not impressed.

However, shark terror aside, the experience of seeing up close the kind of wildlife normally reserved for an aquarium visit more than made up for a previously dull week in the Whitsundays (I should mention that I was ill with laryngitis and skint during this time as well). But it was all part of the character building, can you tell that I like that phrase? I must have used it every week so far, but with good reason. The whole point of travelling is to experience something new, and it may not always be a positive experience, but it will definitely leave you with a good story to tell.